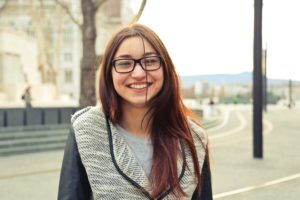 Aisha* has had a difficult relationship with her mother, Sandra*. Sandra’s boyfriend had been verbally and physically abusive to Aisha and Aisha felt that her mother put her relationships with men before her well-being. Aisha also felt overwhelmed and resentful that Sandra relied on her so much to care for her four younger siblings.

Tension between mother and daughter became progressively worse. Aisha refused to follow rules and performed poorly in school. Sandra felt that Aisha’s behavior was beyond her control so she filed a Child Requiring Assistance (CRA) application with the Juvenile Court.

After meeting with Aisha, her probation officer could see that Aisha was struggling. He referred her to ACS’s treatment program. Aisha soon joined the Young Women’s Group, where she could talk with other young women who had shared similar experiences. She also received individual therapy, which helped her to work through painful emotions, improve communication with her mother, and identify meaningful goals for her future.

Aisha worked hard in therapy and things at home got a little better. Sandra dismissed the CRA and tried to listen more openly to Aisha’s concerns. While the relationship between mother and daughter had improved, Aisha felt strongly that she needed some time away from her mom and the home environment that was causing her so much stress. Sandra took notice of the improvements Aisha had made in her behavior and communication style and that she was advocating for herself in a calm and appropriate manner. Sandra had reservations but she set these aside to support her daughter’s request to move in with a favorite aunt for a period of time.
Aisha now has the space she needs to heal, grow, and plan for her future. She continues to work on her relationship with her mother. She is attending high school and plans to begin college in the fall. ACS helped Aisha to find her voice and a positive path toward a promising future.

"ACS helped Aisha to find her voice and a positive path toward a promising future."