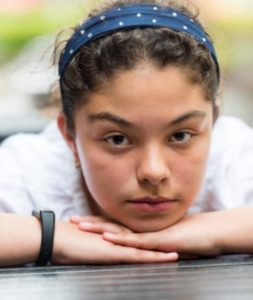 Analisa* is a 14-year-old young woman who became involved with the District Attorney’s Diversion program. Her charge was domestic assault and battery, the result of a physical altercation between Analisa and her mother, Elena. Analisa was functioning well in all other areas of her life, but she and Elena had a difficult relationship. Elena had sought family therapy, but treatment was not yet scheduled due to long waitlists. An ACS clinician intervened at a critical time, providing family therapy at no cost.

Because even trivial conversations would quickly escalate, the clinician immediately focused on helping Elena and Analisa improve the safety of their communication. As their relationship improved, they both learned new skills and began to practice compromise. The clinician helped Elena to better understand normal adolescent behaviors and to see how her feelings of guilt about being a single mother were affecting her parenting. She helped Analisa learn to understand and gain control over her anger. Both mother and daughter worked hard in treatment and made meaningful strides.

Analisa successfully completed the Diversion program. She was truly diverted from the court: She has no delinquent charges and no permanent court record. Analisa remains at home with her mother, where they continue to build on their progress.

Analisa remains at home with her mother, where they continue to build on their progress.