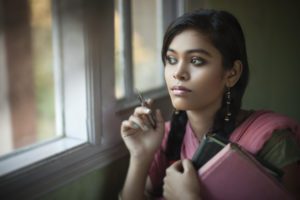 Chloe* was 15 years old when she was referred to ACS through the Juvenile Diversion program. She had been charged with Assault and Battery after an argument with a peer escalated to a physical fight. Engaging in mental health treatment at ACS would result in the charge being cleared from her permanent record.

Chloe began individual therapy sessions with an ACS clinician right away. It soon became clear that Chloe’s behavior was likely linked to some challenges she was facing at home. Chloe lived with her mother, Jessica*, and her older siblings. Her father was incarcerated due to gang violence, which Chloe and her siblings witnessed growing up.

As treatment progressed, Chloe began to understand that her exposure to violence as a child played a significant role in her chronic feelings and impulses of aggression. Traumatic events from her childhood were also important factors in understanding her strained relationship with her mother. Chloe’s clinician suggested that to work through some of these issues, it could be helpful to include Jessica in some of the treatment sessions. Chloe was adamantly against this. Her clinician patiently helped Chloe to understand that improving communication with her mom could ease tensions.

In time, Chloe came to trust her clinician and she allowed her mom to join her in session. This shift gave Chloe a voice. She was empowered to verbalize her need for her mom’s support and to express how much she needed Jessica to really listen to her feelings. The clinician also provided support and guidance to Jessica to help her better understand and respond to her daughter’s emotional needs.

A few months after ending treatment, Chloe’s clinician followed up with the family. Chloe had engaged in no further altercations with her peers and shared that her relationship with her mother was slowly improving. It will continue to take time, but Chloe is clearly on a positive path forward.

UPDATE: We recently spoke with Chloe’s ACS clinician and heard that Chloe, three years later, has now finished the 10th grade and is working two jobs over the summer. Since she will start the 11th grade this fall, Chloe and her mother are working together to make a plan for college.

It will continue to take time, but Chloe is clearly on a positive path forward.