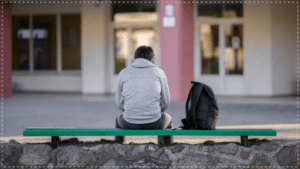 Jackson* is 15 years old and struggles with symptoms of anxiety and depression.

He started having a hard time expressing his feelings and advocating for his needs before the pandemic. But when his school switched to online learning, his symptoms became more severe. He couldn’t stay focused and began falling asleep during class. He refused to turn on his camera and eventually stopped attending classes all together.

Due to his excessive absences, Jackson’s school filed a Child Requiring Assistance application with the Juvenile Court. His probation officer referred him to ACS’s Group Treatment program, THRIVE. When Jackson joined THRIVE, his struggles with participating persisted. His ACS clinician didn’t give up, suggesting that Jackson try individual therapy sessions instead.

After weeks of using different techniques to connect with Jackson, he finally turned on his camera. And eventually, he started talking. His clinician realized that his silence was due to confusion, not indifference. He had a hard time understanding emotions and communicating with peers. These difficulties exacerbated his anxiety and depression.

With patience, perseverance, and understanding, Jackson’s clinician was able to help him gain the skills he needed to participate in treatment and return to school.