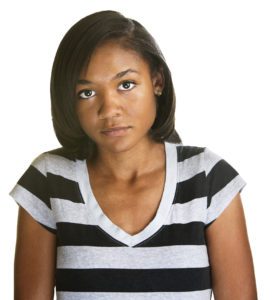 Jayla* spent a lot of time on her own as a young child. Her father was incarcerated, and her mother, Maria*, had to work nights. Frequently, Jayla would phone her aunt, who would talk her through making a simple dinner for herself. Maria also had men in her life who abused substances and at times, these men also abused Jayla and Maria.

Jayla was eventually placed in foster care. She found her foster parents to be good people, but “it’s like living in a foreign country.” She knew they meant well, but everything was just so different. First of all, the food was healthy – not the take-out that she was used to. And her foster parents expected her to eat meals with them, come home every night, and stop swearing. While their home was “nice” and the school was “good,” Jayla, a biracial child, felt out of place in the largely white, upper middle class school and community. She often skipped school to return to her old neighborhood in search of her friends. Eventually, Jayla’s school filed a Child Requiring Assistance (CRA) truancy application, which led to her evaluation at ACS.

At age 15, Jayla was quiet and thoughtful as she met with her ACS clinician. After meeting and interviewing Jayla and those close to her, Jayla’s clinician recommended that she be temporarily placed in a group home with the ultimate goal of reuniting her with her mother. Her clinician also recommended trauma-informed therapy for Jayla, and a parent partner, who could provide support and coaching to Maria as they worked toward reunification.

Upon completing her evaluation, Jayla’s clinician followed up with the family and learned that Jayla was already back at home with Maria. Jayla was attending school regularly and doing better overall. Maria continues to work with her parent partner and Jayla has continued with therapy. Their relationship is improving, and Jayla is moving in a positive direction, which is reason to celebrate.

Jayla is moving in a positive direction, which is reason to celebrate.