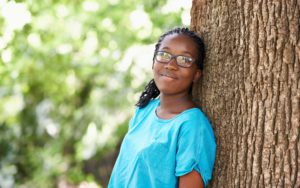 Riley* had endured years of abuse as a child. At the age of 10, she was permanently removed from her family’s custody and placed in a residential facility for children.

Having been the victim of abuse for so many years, Riley had developed a survival instinct to lash out when under extreme stress or when feeling cornered by an adult. This trauma-based reaction resulted in a series of delinquency charges.

As a result of these charges, Riley appeared before a Juvenile Court Judge. The judge was aware of her severe trauma history and suspected that there were serious mental health concerns underlying Riley’s behavior. Subsequently, the question of her competency to stand trial for these charges was raised and the judge referred Riley to ACS for an evaluation.

During the course of the evaluation, the clinician determined that Riley would benefit from living in a facility that was better equipped to understand and respond therapeutically to behaviors commonly associated with trauma. This recommendation resulted in Riley’s transfer to a facility geared toward helping young people develop a sense of control over their lives, something she never had the opportunity to do.

Riley was eventually deemed competent to stand trial, and the charges were Continued Without a Finding. This means that if she incurs no new charges during a specified time period, her case will be dismissed. Since settling in to the new facility, Riley has begun to thrive. She is developing a greater sense of confidence and independence.

"Riley is now developing a greater sense of confidence and independence."